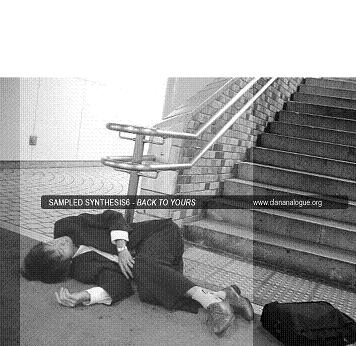 Originally released in 2007. Clan Analogues Melbourne artists have taken some time during the Winter hiatus, huddling in their studios around warm synthesizers, samplers, computers and mixing desks, to produce some introspective, ambient and somewhat experimental works of sound. Have a listen to Sampled Synthesis volume 6 and allow sonic waveforms of indeterminate character to transform your thoughts processes. 01.Thomas Reiner – Aerofoil (Tragflaeche) Written on a flight from Frankfurt to Melbourne, some generous use of tape delay was inspired by air blowing across the aeroplane’s wings. 02. Random Acts of Elevator Music - Waiting in the Foyer On the top floor, awaiting an interview with the CEO, these tones have been scientifically formulated to put job applicants at ease. 03.Koshowko - Promise (4-track demo) A combination of lust, craving and vocoders, with a hint of nostalgia. 04. 98 Biscotti - Glass Full of Happiness Edward Kelly moves into the realms of dream pop, grabbing a sampler and a guitar and making a bit of a blur. 05.Psyburbia vs winduptoys - Abstract Surfing A tune by Psyburbia is run over by the winduptoys machines of destruction. 06. Clowns Smiling Backwards – Melancholia A previously unreleased remix of the classic first Clowns Smiling Backwards single ‘Sad’, created for the theatre production ‘Hun Yango’. 07.Evan on Earth - Glitch 01 A delicate sonic journey for the electronically disturbed. 08. Reductionist - Machine in the Ghost Machine intelligences invade a piano for an experiment in manipulated chaos. 09.The Good Omen – Sigiria Inspired by dualities within human existence: madness and sanity, fear and sensitivity, analogue and digital synthesis, stadiums and nightclubs. 10. ZAZIZ - He's It The sound of a scorching hot Friday afternoon in the city when all you want to do is get home to your beer and couch. 11.Apell - Tim and Tony An enveloping sound of layered chiming acoustic guitars set over echoing drums and raining cymbals, inspired by a cold winter evening jamming at a beach house in Somers. 12. Boy Ronin - Broken Transmission Earth signals interrupt an urgent transmission to the mother craft from Boyronin's laboratory. 13.Kaputnik - The Sleepers Sleep Lazing in the middle of those moments that are the rest from the night before, the sound down on the television…
see also Sampled Synthesis 01, Sampled Synthesis 02,Sampled Synthesis 03, Sampled Synthesis 04,Sampled Synthesis 05
http://clananalogue.com